From the USW: Evonik Workers Rally Behind USW Family Displaced by Kentucky Tornado

Thanks to Jeff Wiggins for sending us this.

USW members Jackie and Trent Campbell lost their home Dec. 10, 2021, when a devastating series of tornadoes ripped through Kentucky. While their family was fortunately able to weather the storm without injury, their losses were enormous.

Now, as they move forward from this harrowing experience, their entire union family is rallying behind them and giving them the emotional support, financial assistance and help they need to start over.

“Everybody has pitched in and helped, and it makes you think ‘we’re not as bad off as we thought we were,’” said Jackie.

Trent looked out the door that night and heard the loud rumbling of the 190 m.p.h. tornado barreling toward his house. He ran downstairs to the basement, shut the bedroom door and laid over his wife, Jackie, as she held their two grandchildren, aged six months and four years old, on the floor.

“The air pressure was unreal, and it was really loud,” Jackie remembered. “I didn’t know if we were gonna make it or not.”

Minutes later, the tornado moved on and the Campbells found most of their house and belongings gone or strewn across their property.

Pictures of the Campbell family's home after the tornado hit.

“All of my union members have called me, even those who have retired, call and check on me,” Jackie said. “It makes you feel so good that you work with good, union people. They don’t think of themselves, they think of what do you need, what can we do for you?”

On Monday morning, two days after the storm, Evonik managers told employees they could be part of a crew to help Jackie and Trent, said Local 727-00 trustee Wade Kennedy.

Local 727-01 member Scott Phillips drove home to pick up his enclosed trailer. He, along with Kennedy and USW members Kurt Kester, Matt Lowery, Wes Lowery, Kevin Baker, Kyle Yates and Becky Canter, as well as a number of representatives from Evonik management, helped the Campbells clean up and salvage what was left.

“Evonik was great,” Jackie said. “The company sent about 10 people. When they showed up, I started crying. If I hadn’t had the help, I wouldn’t have gotten stuff out safely. Some of my grandkids’ toys I wouldn’t have thought to get. My fellow union members helping me meant a lot. I’m blessed to be able to work with so many good people.”

USW’s staff union, Local 3657, donated $2,000 to help the Campbells and the Calvert City locals gave them gift cards to replace what they lost. 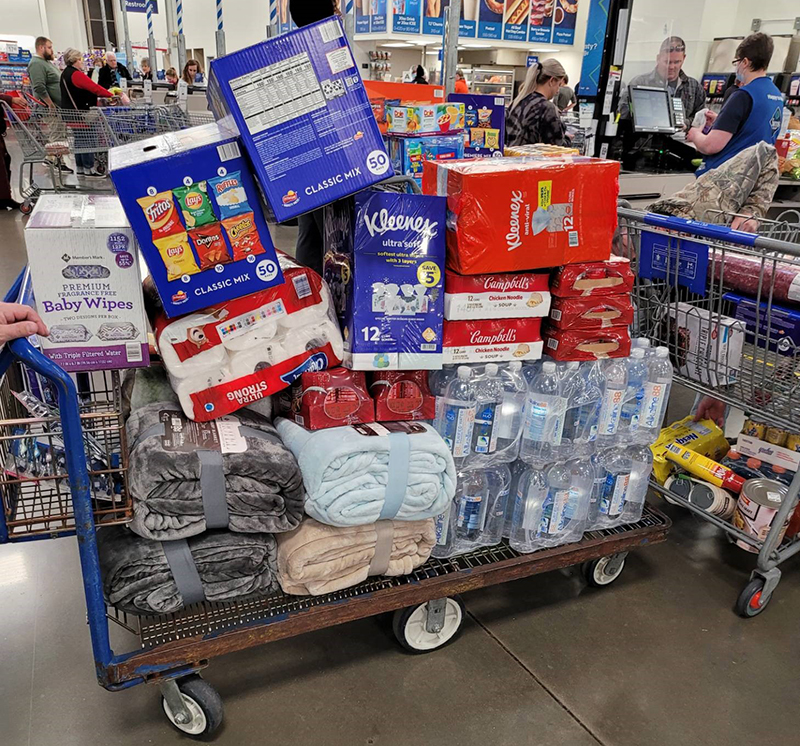 Relief supplies that members from USW Local 9447 bought for the Mayfield, Ky., community the day after a massive tornado tore through the downtown area.

“As union brothers and sisters, we always need to help out and help each other whenever and however we can,” Kennedy said. “We may not be blood family, but we’re a family because we work together.”

If you would like to help, go to https://ky.aflcio.org/disaster.

You can also write a check to the USW Charitable and Educational Organization, writing “Disaster Relief” in the check memo line and mailing it to: